A special invitation from Cherrytree Records...

Cherrytree Records will be in New York City on October 12th for the biggest day of their lives... the day their first official album FREE WIRED will be released. 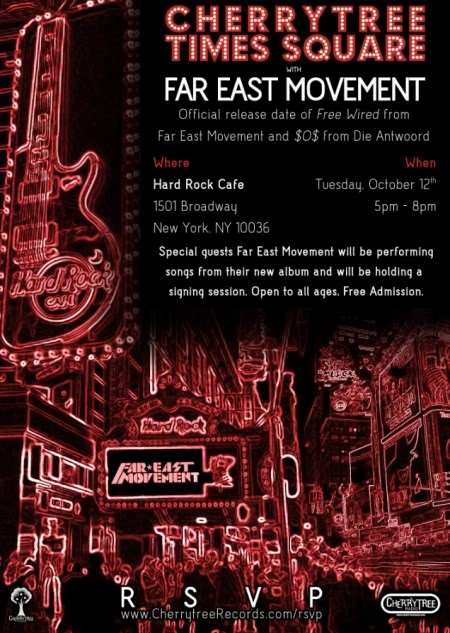 Cherrytree Records is teaming up with the Hard Rock Cafe to throw an album release party for us in Times Square NYC at the Hard Rock Cafe where they'll be performing songs from our new album with a bunch of special Cherrytree guests and the show will be shown on the huge screen in Times Square. This show will be FREE, all ages, and open to the public and their new FREE WIRED album will be there for sale so you can get your copy at the show. They'll also be around to sign em and take flics with yall before they head to our sold out show later that night with Mike Posner at Irving Plaza.

Here's the official info for the free Free Wired show...

Performance by Far East Movement and signing session after. Copies of their new album FREE WIRED will be on sale at the event.

Receive a free lithograph poster of the event if you RSVP at Cherrytreerecords.com

Sep 24, 2010
Vinyl release of 'Symphonicities' released in US on Tuesday, 28 September - includes new bonus mix of 'Every Little Thing She Does Is Magic (Bronx Street Fair Mix)'...

The Vinyl release of 'Symphonicities' is released in US on Tuesday, 28 September - includes new bonus mix of 'Every Little Thing She Does Is Magic (Bronx Street Fair Mix)'...

Live Nation announced today that the Sting 'Symphonicity' performance on 4th of October, previously scheduled to take place at the MEN, is being relocated to the O2 Apollo Theatre Manchester. Similar to the engagements at the Royal Albert Hall in London and The Sage Gateshead, performing at the O2 Apollo Manchester will provide fans the opportunity to experience Symphonicity in a theatre setting.