Today, President Bill Clinton announced the program and featured attendees for the seventh Annual Meeting of the Clinton Global Initiative (CGI) to be held September 20-22 in New York City. This year’s gathering will bring together an estimated 1,200 diverse stakeholders, including current and former heads of state, Fortune 500 CEOs, national and local government officials, and leaders from the nonprofit sector to devise and implement workable solutions to some of the world’s most pressing challenges.

"Since we began in 2005, CGI members have made great progress in addressing critical global issues by making more than 2,000 commitments through CGI that have and will improve the lives of more than 300 million people in more than 180 countries," President Clinton said. "As many of these commitments come to fruition, I am proud that we will be showcasing the tangible impact they have made."

This year, the CGI program is focused on three primary topic areas:

• Jobs, Jobs, Jobs: Generating Employment for the 21st Century, which will highlight effective workforce training programs, showcase innovative government incentives that catalyze inclusive job growth, and examine market-leading business developments that can sustainably increase profits, productivity, and prosperity around the world. This topic area will build on the work of CGI America, the first CGI event focused on job creation and driving economic growth in the U.S., which took take place this past June in Chicago.

• Sustainable Consumption: Ensuring Long-term Prosperity on a Finite Planet, which will explore how, by redefining consumption, organizations can quickly respond to the realities of impending resource constraints and instability while ensuring economic growth.

• Girls and Women: Scaling What Works, which will return as a topic area for this year’s Annual Meeting and will build on the continued success of past efforts by taking a deeper look at what is working in girls and women’s empowerment and highlighting areas where more resources could make a significant impact.

Other special sessions will address critical issues in the Middle East and North Africa, as well as the role architecture, sports, and the arts play in fostering positive change. The complete program, session descriptions, and participants are available online at www.clintonglobalinitiative.org/ourmeetings.

In a special ceremony, President Clinton will also present the fifth annual Clinton Global Citizen Awards, which recognize remarkable individuals for their leadership in addressing global challenges in philanthropy, government, civil society, and the corporate sector including:

• Trudie Styler & Sting, founders, the Rainforest Fund will be honored for their commitment to protecting rainforests around the world and for defending the rights of the indigenous peoples who live there.

• Philippe Douste-Blazy, chair of the board, UNITAID will be honored for the French Government’s innovative financing of UNITAID to expand access to health for the world’s most disadvantaged people.

• Denis Mukwege, founder and medical director, the Panzi Hospital of Bukavu will be honored for his commitment to healing the women and girls of the Congo who have fallen victim to sexual violence as a result of the ongoing war.

• Mhammed Abbad Andaloussi, chairman and CEO, Injaz Morocco will be honored for his visionary approach to transform the Moroccan education system by mobilizing public and private partnerships to create better schools.

• Güler Sabanci, chairman and managing director, Sabanci Holding will be honored for her leadership to empower girls and women around the world, and for her commitment to social, cultural and economic development throughout Turkey.

The ceremony will also include live performances by Sting and K’NAAN.

View and share session webcasts from the 2011 CGI Annual Meeting by visiting: http://live.clintonglobalinitiative.org and follow @ClintonGlobal (http://twitter.com/clintonglobal) for meeting news and highlights. The event hashtag is #CGI2011.
Comments
3
You must be a logged-in member to add comments. Log In | Subscribe
September 06, 2011 posted by omaniongrrl
Clinton Global Initiative
Yay Trudie and Sting! Awesome news!
September 03, 2011 posted by pd_soulcages
CGI
What an incredible honor! It must be great to have your accomplishments acknowledged internationally. Congratulations, Sting & Trudie!
September 02, 2011 posted by pumkin
CGI honor
Congratulations Sting and Trudie.
Newer comments    1 - 3 of 3    Older comments 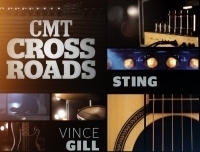 Sep 1, 2011
Two of Music's Biggest & Most Highly Acclaimed Artists will meet at the Crossroads as they blend their Musical Styles and Exceptional Talents in CMT's Hit Series CMT Crossroads: Sting & Vince Gill...
Together they have earned over 35 Grammys, sold over 125 million albums, and performed in front of as many, if not more, music lovers all over the world. Now world-renowned musician Sting and country legend Vince Gill will be making music history in the newest episode of CMT CROSSROADS: STING AND VINCE GILL, premiering in November on CMT. After a five-year absence, CMT is bringing back its critically acclaimed series CMT CROSSROADS to New York City, for an invitation-only taping of two of music’s biggest superstars. Sting and Gill will perform their classic hits and selections from both of their highly anticipated new releases hitting stores this fall...
Read more
+

Aug 30, 2011
Sting To Perform A Special Concert In NYC To Celebrate the 25th Anniversary of His Solo Career – Event to Benefit the Robin Hood Foundation...
On October 1, 2011, join Sting at the Beacon Theater in New York City as he celebrates the 25th anniversary of his solo career on the eve of his 60th birthday with a very special concert event to benefit the Robin Hood Foundation. Special guest performers include Bruce Springsteen, Lady Gaga, Stevie Wonder, Mary J. Blige, Herbie Hancock, Robert Downey Jr., Vince Gill, Will.i.am, Rufus Wainwright, Branford Marsalis, Billy Joel, and Chris Botti. Throughout the evening, Sting will be backed by a band featuring his longtime guitarist, Dominic Miller, bassist Christian McBride, keyboardist David Sancious, drummer Vinnie Colaiuta, and backing vocalists Jo Lawry, Lisa Fischer, and Tabitha Fair. In keeping with long-standing tradition of being on stage during his birthday, this will be a truly unforgettable night...
Read more
+