With sing-alongs and signatures, tributes and telegrams, Amnesty International has perfected the concert-for-a-cause that matches rock's fervor and drawing power with a clear, insistent message. On its way around the world, the Human Rights Now Tour brought Bruce Springsteen, Sting, Peter Gabriel, Tracy Chapman and Youssou N'Dour (a superstar in Senegal and West Africa) to John F. Kennedy Stadium here on Monday.

They have performed for half a million people since the tour began Sept. 2 in London. It will go to Asia, Africa, Greece and South America, and the organizers have petitioned the Soviet Union for the opportunity to appear in Moscow. (Home Box Office will present highlights from the concerts Dec. 10, and there will be a live radio broadcast of the concert's final show on Oct. 15 in Buenos Aires.) The first of the tour's three United States shows - the others are Wednesday in Los Angeles and Friday, minus Sting, in Oakland - generated not just roars of applause from the crowd of 75,000 people but also more than 60,000 signatures on a petition to have the United Nations Universal Declaration of Human Rights adopted around the world; the General Assembly approved it on Dec. 10, 1948.

Telegrams (for which concertgoers paid , each) and petitions on behalf of individual political prisoners were also well subscribed. The tour's purpose is to raise awareness, not money; while concert tickets in North America and Europe have been priced at around , admission in Budapest and in Costa Rica, for instance, has been under . Reebok, the athletic-shoe manufacturer, is to make up the deficits.

The tour brings together four of the most earnest performers in English-speaking rock; Mr. N'Dour sings in French and Wolof, a Senegalese language. Yet Sting's pop charisma, Mr. Gabriel's theatricality, Mr. Springsteen's rock-and-roll exuberance and all the performers' guest spots in one another's sets gave the concert a vitality far beyond dutiful altruism. Each performer also had songs that directly addressed the declaration's concerns about the dignity of the individual, narrowing the division between entertainment and activism. Some of the concert's best moments - especially the stadium-wide sing-along on Mr. Gabriel's 'Biko,' an elegy to the South African activist -were virtual reruns from Amnesty International's 1986 Conspiracy of Hope tour of the United States, but they were moving nonetheless.

Monday's concert began a few minutes early with an all-star version of the Wailers' 'Get Up, Stand Up' and concluded, more than seven and a half hours later, with the same song. Joan Baez, who joined the tour for the United States concerts, sang a spiritual, 'Oh, Freedom,' and tried to lead the crowd in John Lennon's 'Imagine,' but the audience members were more concerned with getting to their seats.

Mr. N'Dour led his band in songs that mixed African and British-American rock, but in troubling proportions. Where he used to send his voice soaring above rolling, chattering Senegalese rhythms, he now tops Americanized, heavy-on-the-downbeat funk with bits of African percussion and melody, punctuating the rhythm with vocal phrases that barely hint at what he can do. He'd be better off singing English lyrics to the Senegalese rhythms and melodies that make him distinctive.

Accompanied only by her acoustic guitar, Tracy Chapman sang the hardest-hitting songs from her debut album - about poverty, brutality, riots, revolution. In a voice that seemed even deeper and more melancholy than it does on record, she held the audience rapt with 'Fast Car.' But a new song, 'Freedom Now,' was unmemorable on a first hearing.

Sting, with his brilliant jazz-funk band featuring Branford Marsalis on saxophone and Kenny Kirkland on keyboards, played the concert's best set - dance songs, ballads, pop songs, message songs, all in a smooth arc. He dedicated 'Set Them Free' to Nelson Mandela and 'all the children in the jails of South Africa'; although the song's verses are about possessive lovers, the chorus connects with Amnesty International's work. Two ballads, 'Fragile' and 'They Dance Alone' (about 'disappeared' prisoners in Chile), were pristine and touching; 'One World' and 'Fortress Around Your Heart' were jubilant. Mr. Springsteen joined Sting for 'Every Breath You Take,' which at this concert seemed appropriate to Amnesty's role in monitoring human rights abuses.

Mr. Gabriel's set was darker and more ominous. With an internationalist band including an Indian violinist, L. Shankar, and Mr. N'Dour as guest vocalist, Mr. Gabriel started with a new instrumental, 'Of These, Hope,' then turned to his catalogue, performing punchy, incisive versions of 'Shock the Monkey,' 'Games Without Frontiers,' 'Sledgehammer' and an extended 'In Your Eyes' that finally unleashed Mr. N'Dour's voice. The set's gentle peak came in 'Don't Give Up,' when Ms. Chapman sang the title's advice with genuine warmth.

But the audience, with a large New Jersey contingent, had been awaiting Bruce Springsteen, who opened his set with a stomping version of 'Born in the U.S.A.' that would have been a finale for any other performer. Avoiding songs from his current album, 'Tunnel of Love,' Mr. Springsteen started out with bleak slices of life such as 'Cover Me' and 'My Hometown,' then moved into his hyper-romantic epics from the mid-1970's: 'Jungleland,' 'Thunder Road' and 'Born to Run.' Sting joined him to sing the first verses of 'The River.'

Mr. Springsteen's voice and band were as muscular as his ballooning biceps; he threw his whole body into every note, even during harmonica solos. And just when he was verging on bombast, he'd shift to the humor of 'Cadillac Ranch' or 'Glory Days.' The audience sang just about every word with him. For the finale, the E Street Band accompanied all the headliners in Bob Dylan's 'Chimes of Freedom' and a reprise of 'Get Up, Stand Up.' With a minimum of rhetoric, the concert had made its point.

Just the scale of last night's 'Human Rights Now!' concert at JFK Stadium might have prevented the occurrence of any actual music: 75,000 people; six big-name artists; music for more than six hours; TV cameras; plenty of stadium-crossing "wave" spectacles. And works designed to draw attention to Amnesty International's campaign for the Universal Declaration of Human Rights.

But surprisingly, throughout the marathon, there were moments in which the message and the music magically coalesced. If the stadium mega-event has become synonymous with blunt bashing and little musical communication, this concert - which featured Youssou N'Dour, Tracy Chapman, Sting, Bruce Springsteen, Peter Gabriel, Joan Baez and other performers - showed that subtlety is not only possible, but desirable.

Chapman proved it in a surprisingly evocative 35-minute set that focused on the activist material from her debut LP. 'Behind the Wall', sung a cappella, benefited from Chapman's trembling, edge-of-bitterness vocal treatment, and 'Mountains O' Things' received a declarative, straightforward arrangement marked by tension-filled verses that rarely found proper release. That made the song more effective. Chapman had little problem holding the crowd, but on a new song, the appropriate 'Freedom Now', which echoed the day's human-rights rhetoric, the catchy hook didn't catch on immediately.

Even Springsteen, known for his fist-clenched anthems, tempered his performance with a gentle, rolling treatment of 'The River', which featured Sting on lead vocals. Sting, too, sought subtlety. After a collection of hulking rockers - the rousing opener 'King of Pain', an eight-minute version of 'One World' filled with jaunty solos - the British singer/songwriter donned a guitar for the slight 'Fragile'. The song's inbred lyricism - "on and on, the rain will fall, like tears from a star" - was complemented by the percussion tapestries of Minu Cinelu and Sting's own wrenchingly romantic single-line guitar. The feeling evaporated into an equally delicate moment on 'They Dance Alone', Sting's song about the thousands who have disappeared in South America under suspicious circumstances. And during a medley that compressed 'Bring on the Night' with 'When the World Is Running Down, You Make the Best of What's Still Around', Sting surrendered the spotlight to pianist Kenny Kirkland, whose extended solo contained heavily syncopated block chords and impressive be-bop-based solo lines.

Throughout the show, the headliners integrated members of the other bands into the act. Sting did 'Every Breath You Take' as an encore, and was joined on vocals by Springsteen, whose contributions served to drain the song of its venom, turning a once-bitter song into another plodding rocker. Sting and Gabriel sang together briefly on 'They Dance Alone'. Saxophonist Branford Marsalis, a member of Sting's band, contributed '60s soul lines to Gabriel's 'Sledgehammer'. The most memorable guest appearance came from Chapman, who sang the female lead on Gabriel's suite-like 'Don't Give Up'. Bending her voice to fit the twisting, gospel-influenced line, Chapman sounded at ease and reassuring, as if the part were written for her.

Delicate, painterly touches distinguished Gabriel's set. Using Indian violinist Shankar and N'Dour as part of his backing ensemble, Gabriel managed to make his songs - familiar art-rock epics such as 'In Your Eyes' and 'Shock the Monkey', and the instrumental Of These, Hope', from Gabriel's sound track to 'The Last Temptation of Christ' - ring with the push-pull of inner-band communication and the freshness of discovery, as musicians from various nationalities exchanged musical ideas.Anchoring the conversation was the impeccably minimalist drummer Manu KatchÃ©, whose straightforward timekeeping suggested a rainbow of polyrhythm.

Particularly evocative was 'Games Without Frontiers', a song Gabriel dedicated to the "45,000 unnecessary casualties in Nicaragua," which found the singer doing a military goose step across the stage, and a throbbing, seven-minute version of Biko that was laced with violin and synthesized bagpipes. This song evolved into a massive sing-along and closed Gabriel's set, which was perhaps the most musical of any throughout the day. Springsteen opened with 'Born in the USA', and followed that anthem with another, more personal one - 'The Promised Land'. Clearly the crowd's favorite, Springsteen and the E Street Band needed little warm-up to reach full throttle. Powered by the bone-penetrating snare drum backbeat of Max Weinberg and the equally direct bass of Garry Tallent, Springsteen's outfit stirred up elementally simple rock and roll with few frills and the propulsive motion of a hurtling train. 'Cover Me', which featured the horn section Springsteen used on the 'Tunnel of Love' tour, was an all-stops-out showcase for Springsteen's jagged - and relentless - vocal energy.

If some of the sets seemed thick with significance - Sting seriously stretched the message of 'If You Love Someone, Set Them Free' by dedicating it to Nelson Mandela and those jailed in South Africa - Springsteen's performance was a rollicking party, an object lesson in the power of pure rock and roll. The hammerlocking grooves of Springsteen warhorses 'Cadillac Ranch', 'Born in the USA', and 'Born to Run' were spelled by a few glimpses from the notably suite-like 'Jungleland', one of the show's hands- down highlights, and another narrative epic, 'Thunder Road'.

Springsteen seemed to be the most apt at leading whole-stadium sing-alongs. Among the 12-song set's most memorable: 'My Hometown', 'Glory Days', and 'Born to Run'.

The show began, 10 minutes early, with the principals taking turns on the Bob Marley rebel yell, 'Get Up, Stand Up', which also introduced Baez. As she did for the American edition of Live Aid in 1985, Baez opened the show. This time, she started with the gospel standard 'Oh, Freedom', and delved immediately into John Lennon's 'Imagine', and the Beatles' 'Let It Be', neither of which seemed to rally the still-gathering crowd. The show ended more than seven hours later with the same all-star cast that started it.

Supported by the E Street Band, the group embellished Springsteen's arrangement of Bob Dylan's 'Chimes of Freedom', with frequent changes in the lead vocal roles. That was followed by a similarly structured reprise of 'Get Up, Stand Up'.

(c) The Philadelphia Inquirer by Tom Moon
Comments
0
You must be a logged-in member to add comments. Log In | Subscribe 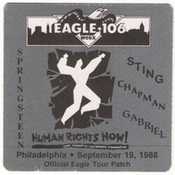