Defying reason and my ecological conscience, I had decided not to miss Sting at the Globe: my favourite musician at my favourite place in London, performing with an unbelievable host of celebrities something to do with 'music, merriment and Shakespeare'! The very fact that I did not really know what to expect added to my excitement.

On arrival in Heathrow, a quick glance into 'Time Out' told me that the cast originally announced and already very spectacular (next to Sting, musicians such as James Taylor and Lulu and biggies from the theatrical community like Vanessa Redgrave, Mark Rylance - home game for him - and Paul Scofield) was to be boosted by the appearance of Ethan Hawke.

I got to the Globe early, which turned out to be a wise move, because not only did I spot Sonia Ritter, an actress of last season's company who had been 'adopted' by my school through the Globe's educational scheme and was therefore happy to hear from her little friends, but also a young girl in the piazza next to the theatre proper: my anticipation of the evening rose considerably when Mickey, Sting's daughter, told me it would be very good - and she knew because she had been to rehearsals (she also talked me into buying a raffle ticket after which I came away £10 lighter, but with a few Kiehl's samples and the firm knowledge to have helped the Peace Garden some more).

When the doors opened, I was lucky enough to find a spot close up front (being a groundling, i.e. in the yard with the commons, is a must in the Globe if your back can bear it). Looking around, one could see a lot of beautiful people posing in the 'Gentlemen's Rooms' (sic!), Sting's children sitting in the middle gallery and a cheerfully expectant crowd. Then (as Trudie watched from the stage balcony) the cast came on, all dressed in strange brown-purple monk's habits, to sit on plain wooden benches at the rear of the stage (Sting with hair back to 'Mercury Falling' length, a nice Italian? tan and an occasional shiver from the draught so the cloak came in handy, while we were packed tightly enough not to need our extra warm clothing). After a Tibetan opening, a man droning away in an oddly resonant voice for several minutes and a Snow Lion, we were introduced into the Bard's world and word by Richard E. Grant and Jack Dee doing a funny little scene on how Will's producer cuts Hamlet's most famous soliloquy down to digestible length - promptly to be performed by Ethan Hawke: a very natural and deeply but quietly tormented Hamlet.

Mark Rylance as Henry V reminded us of the horrors of war, and Vanessa Redgrave played Constance (from 'King John') bemoaning the murder of her child so grippingly that she and probably every parent in the audience were driven to tears (Sting also blinked and wiped his eye). Then James Taylor sang a song from 'Twelfth Night' in his beautiful, clear voice, to be followed by the awe-inspiring senior of the cast, Paul Scofield, who performed John of Gaunt's speech from 'Richard II' - a stately man enraged by the leasing out of England. When all the cast applauded him in a standing ovation, Sting was the only one to remain seated! -?- Well, he was next, plus all the others except the musicians left, so the stage was all his for 'Under the Greenwood Tree' from 'As You Like It' - a nice little song and a bit of joking around with the musicians on 'come hither...'. The fact that it was all natural and unplugged was perfect for the venue and created a sense of familiarity, even intimacy, an the subsequent cheers from the audience showed that it was well appreciated.

These cheers became a little screeching and girlish at the beginning of the next scene, when the boys from 'Lock, Stock etc.' reappeared to do the fight from 'Romeo and Juliet'; especially Vinnie Jones as Romeo who for a split second stepped out of his role to enjoy the audience's recognition: then followed the fight scene with the most acrobatic, fresh and tattooed Capulets and Montagues I have ever seen! After the interval Lulu, with a stunning voice and very pretty looks, presented another song from 'Twelfth Night', thus introducing the lyrical part of the evening. 'Being Your Slave', sonnet # 57, was read by Miranda Richardson, then sung by Layla Kaylif, before Paul Scofield recited 'Shall I compare thee to a summer's day?', sonnet #18 - I was deeply moved by this noble old gentleman speaking one of the most beautiful love poems in the world. Vanessa Redgrave's rendering of sonnet #2, 'When forty winters shall besiege thy brow', was equally impressive. After another song from James Taylor (happily applauded by Sting), Simon Russell Beale, Lennie James and Jack Dee played a scene - again from 'Richard II' - on punishment/revenge, which was perfectly matched by Imogen Stubbs as Portia pleading mercy (from 'The Merchant of Venice').

The hilarious bit with the mechanicals/wannabe actors from 'A Midsummer Night's Dream' was next - and what fun everybody had: Jimmy Nail as a dry Geordie Quince distributing the roles, a very clownish Ian Talbot as Bottom the Weaver wanting to be the lover AND his lass, a broadly grinning Ethan Hawke as Flute, and a very convincingly s-s-s-slow of s-s-s-stoody Snug the Joiner aka Sting, nervously crumpling his cap. Then Mark Rylance as Oberon/ Puck spoke some closing words, and the evening was rounded off with Sting singing the final song from 'Twelfth Night' and everybody joining in.

Suddenly, the cast showered us with petals (what a sweet surprise! - I kept a few rose and tulip ones), before Trudie finally appeared on stage to receive the cast's and the audience's hearty applause for her magnificent idea and to express her thanks to everybody in return!

It was a wonderful evening, and a hundred times worth the journey from Germany. The fact that it was all in aid of a good cause i.e. helping the construction of the Tibetan Peace Garden made it even better, especially in light of the present crisis in Kosovo which shows how vital voices of peace are.

(c) Angelika Goldman for Sting.com
Comments
0
You must be a logged-in member to add comments. Log In | Subscribe 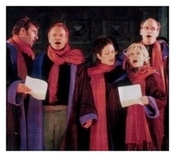