The astonishing thing about the headline group, the Police, at last night's Police Picnic '83, is rather than stagnate in its success, The band gets better and better. The performance this year was incomparably superior to the performance of last year, enough to raise the question of whether there is any band in the world more accomplished live and on record than the Police.

Sting, dressed like one of Robin Hood's merry men in russet britches, boots and a white blowsy shirt, is every inch the rock star these days, a rival for Mick Jagger or Rod Stewart in his distinctive physical bearing and talent. With his image cast 30 feet high on video screens on each side of the stage, he effortlessly had the audience of 30,000 hanging on his every smirk and wave of his hand. Within the first three songs he had the audience singing along with the Police's seemingly endless string of hits.

The Police started with the opening cut of its new album, 'Synchronicity', and spent the first half hour alternating between old favourites from previous albums ('Spirits In The Material World', 'Message In A Bottle') and new songs such as 'Wrapped Around Your Finger' and 'Walking In Their Footsteps'. There is no tighter, nor fuller sounding trio in rock, with Andy Summers', slick, jazzy guitar arpeggios, Sting's melodic bass lines and Stewart Copeland's astonishingly subtle and authoritative drumming holding the audience in thrall.

The Police are not always especially loveable on vinyl - there are elements of mannerism that creep in and rob the band of its sense of spontaneity - but in concert, Sting in particular is so clearly in love with performance that the band projects a mesmerising combination of accomplishment and pleasure in novelty.The tumultuous reception that the Police received from its young audience - especially on its current hit, 'Every Breath You Take', harkened back to the days of (oh blasphemy) The Beatles. And it almost overshadowed some of the, other solid acts of the day.

The Police Picnic '83 offered the greatest cross-section that the annual picnic has had so far in its three-year existence. The principal strength was from the three internationally acclaimed black acts on the bill - King Sunny Ade, James Brown and Peter Tosh. Ade, especially, offered an immensely warm and engaging hour of music, characterised by the poly-rhythmic, African ''talking drums,'' call-and-answer response choruses, and sweet and stinging electric guitar work. James Brown offered his famous no-holds-barred show, with anguished melodramatic renditions of such soul classics as 'Please Please Please' and 'Try Me'.

Typically in these sort of all-day concerts, the audience picks one act to be the sacrificial lamb, and for a while it looked as though Brown was the one they had selected as he was pelted with refuse and generally ignored. After a half-hour, though, the extraordinary intensity of his performance won over the crowd, many of whom were undoubtedly not born when he first began doing this routine. (Among the staunch fans, though, were the members of the Police, who were dancing enthusiastically to Brown's music.)

Peter Tosh also offered an immensely professional set, with the crown prince of reggae dancing in a long robe, his Rasta locks flying about his face, in front of a crack band. In no time, he had the audience dancing en masse to the intricate and seductive rhythms. The other two bands on the bill, Toronto's Blue Peter and The Fixx, an English new-wave dance band in the mode of Flock of Seagulls and Simple Minds both offered creditable performances and were well received. However, more than any other year of the Police Picnic, 1983 belonged to the Police. 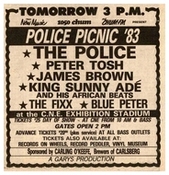