Police Report: August 31, 1983. Arrive outside Pacific Coliseum at 7 p.m. Scalpers doing brisk trade at 30 bucks a crack. But ticket booth still has few tickets left. Sign on ticket window warns: ALL REMAINING SEATS ARE BEHIND THE STAGE AND VIEW IS OBSTRUCTED. Teen fans don't mind. They pay (.50) each, then join line-up to get into PNE grounds.

7:28. Man in ticket booth puts sign on window: SOLD OUT. All 16,611 tickets are gone. First rock concert sellout at Coliseum in two years.

7:30. Enter PNE grounds. Join long lineup to get into Coliseum. Inside building by 7:40. Warm-up act started 15 minutes early, at 7:15. No twins in the six-piece electro-funk dance band, which sings 'Lies, lies, lies, yeh''. Best part is band's seven photography-style lighting umbrellas. They sit on stage like potted palms in a hotel lobby.

8:30. Riley O'Connor, head of Perryscope Concerts, the company putting on concert, comes on stage. ''The band is not going on until everyone sits down in their seats!'' he says. Most people continue sitting in aisles on floor level. People on floor continue standing on seats.

8:40. O'Connor returns to play nasty: 'Everyone please return to their seats! This show is not going to start until you start listening to me!'' Someone shouts out, 'Okay Dad!'' Bouncers help convince crowd to comply.

'That's what I like about it,'' says Roxanne, who is dressed exactly like the five friends she's with - white shirt, sleeveless sweater, mini-skirt, pointy black shoes, white socks. All six do the new-wave bob in time to music.

Band plays another new song, 'Walking in Your Footsteps'. Guy in his 20ssitting on other side of me shouts in ear: ''Copeland is fabulous.'' Assume he means Stewart Copeland, Police drummer.

''Listen to those African cross-rhythms, they're almost Arabic,'' says the guy (his name is Brad, says he's a UBC student and musician). 'Fabulous,'' he says.

''The Police are accessible, you know?'' I'm not sure whether he's telling or asking. ''But they're avant-garde too... list to Summer's guitar on this one.''

He's talking about Andy Summers, the Police's unconventional guitarist who slides out some jazzy riffs, but mainly chords that fuse pop, punk and ethnic rhythms.

I listen to song called 'Message in a Bottle'. Tell him I didn't need a bottle opener to get the message out of that one. Next song: 'Walking on the Moon'. Crowd sings along with Sting: ''Yo-yo-yo-yo.''

Before Sting sings 'Oh My God', he tell crowd: 'Three hundred and sixty-five days ago I was standing in this same spot. It's funny isn't it?'' Also says the first time the Police played Vancouver in the late 70s ''we played to about seven people.''

Band sings 'De Do Do Do, De Da Da Da'. It's so easy even I sing along. Brad tell me names of Police songs as trio plays them: 'Wrapped Around Your Finger', 'Tea in the Sahara', 'Spirits in the Material World', and 'Invisible Sun'.

Next song, 'King of Pain', gets giant response. ''Listen how painful the imagery is here,'' says Brad, excited. ''There's nothing like it.''

Hmmm. Good beat, mainly easy to dance to, intelligent musical statements. Maybe that's why Police are No.1 on the record charts.

10:09. Police run back on stage (Sting still shirtless, still wearing top hat) and 'Don't Stand So Close', 'Every Breath You Take' (crowd roars) and 'Roxanne' (''This is my song!'' squeals Roxanne, giving me a nudge.)

''Yeah. Great energy. Fabulous tunes,'' I agree. 'No gimmicks, but more rock than I imagined three guys could put out. I guess it's like the song says, every little thing they do is magic.''

(c) Vancouver Sun by Neil Hall
Comments
0
You must be a logged-in member to add comments. Log In | Subscribe 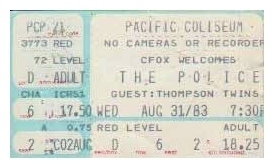