Sheryl Crow, James Taylor, Billy Joel, and Lenny Kravitz broke out their bell bottoms to sing songs from the late '60s at the Woodstock-themed concert, held at New York's Carnegie Hall on May 19.

Ticket prices for the concert and gala party afterwards ranged from $150 to $2,500, but Sting told CBSNews.com that the show alone was worth the price.

"It's a good show anyway, whether you care about the Rainforest or not," he said. "It's value for money."

Styler, who produced the concert, agreed. "It just blows me away each time we do it," she said.

Even comedian Will Farrell got into the act, singing Richard Harris' 'Macarthur Park' dressed in a red unitard and love beads.

For Crow, the evening had special meaning: It was one of her first performances since undergoing cancer treatment in February. "I am so happy to be here tonight on this beautiful planet we must save," she told the crowd.

The foundation continues to raise money through an online auction that will run until June 9. The collection up for grabs includes autographed items from Tim McGraw, Muhammad Ali, and Elvis; and meet and greets with Jewel, Rod Stewart and Kris Kristofferson. There are also luxury vacations, artwork and VIP audience tickets to television talk shows.

Mega-stars gathered at Carnegie Hall on May 19th to raise awareness and funds to help preserve South America's Rainforests. NY1's George Whipple was there and filed the following story.

The Rainforest Foundation held their benefit concert at Carnegie Hall. This year's theme was "Shades of Woodstock." Billy Joel, James Taylor and Sting sang the anthem.

The Rainforest Foundation Fund was founded by Trudie Styler and her husband Sting in 1989.

"Any environmental problem cannot be separated from any other, you know, they're all connected," said Sting. "What happens in South America or Africa or the Far East affects this city, too."

A conga line snaked through Carnegie Hall, urging the donors to give peace a chance. It was led by Lenny Kravits, followed by Cheryl Crow, Billy Joel and James Taylor, with Sting bringing up the rear.

Russell Crowe sang tribute that he wrote to the late actor Richard Harris a capella. A little bit of comic relief was provided by the red elfish Will Ferrell. The concert would not have been complete without the classic Sonny and Cher hit, 'I Got You Babe', performed by Sting and Sheryl Crow.

Lenny Kravitz did his rendition of Sly and The Family Stone's, 'Thank You'. James Taylor was in uniform to sing Edwin Starr's W.A.R. For the grand finale, all were joined on the Carnegie Hall stage by children for 'Let The Sunshine In'.

(c) NY1 by George Whipple
Comments
0
You must be a logged-in member to add comments. Log In | Subscribe 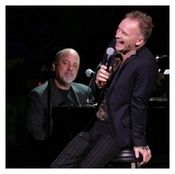