And guess who came out on top? It was the fans.

The two Rock and Roll Hall of Famers delivered nearly three hours of classic material when they brought their Rock Paper Scissors North American Tour to the SAP Center in San Jose on Thursday.

This was not a case where two headliner-caliber artists played two distinct sets, separated, of course, by a 30-minute break so fans can go drop more money on beer and T-shirts. Instead, it was one epic, fully integrated set, as the two Englishmen shared vocals, songbooks and bands.

It wasn't like a Sting solo show. It didn't really resemble a Peter Gabriel gig. Instead, it was better - as these two artists found synergy and managed to take their games to higher levels.

Gabriel opened the show in dramatic fashion with the pulsing "The Rhythm of the Heat," which also kicks off his self-titled 1982 album (usually referred to as "Security"). The song seemed to mesmerize the capacity crowd, which wouldn't break out of its trance-like state - and stand at attention - until Sting entered the picture with the Grammy-winning "If I Ever Lose My Faith in You" from "Ten Summoner's Tales."

The magic really began once the two men joined forces, sharing the microphone on four straight songs while backed by a rock solid ensemble that included longtime players from both stars' bands. Three of the songs were winners from Gabriel's songbook - "No Self Control," "Games Without Frontiers" and "Shock the Monkey" - while the fourth was the dull Police offering "Invisible Sun."

They'd then trade turns in the spotlight - with Gabriel unveiling "Secret World" and Sting turning to the Police's "Driven to Tears" - before coming together again for a richly moving "Fragile" (from Sting's " ... Nothing Like the Sun").

The duets worked wonderfully, as the two voices complemented each other and brought new intrigue to old favorites like Gabriel's "Kiss That Frog" and the Police's "Message in a Bottle."

Indeed, some of the most memorable moments of the night came when one star would sing lead on the other's song. Notably, Sting was electrifying on "Shock the Monkey" and Gabriel managed to put his own, decidedly different, sexy stamp on "If You Love Somebody Set Them Free."

Many fans had picked sides before walking into the show, as if this match of Rock Paper Scissors would truly decide who is the greater of the two artists. Yet, that's not how this played out at all. There was no competition - Sting and Gabriel were on the same team.

And the fans quickly got with the program, responding with basically equal enthusiasm for both men's performances and material.

Sting and Gabriel - aged 64 and 66, respectively - were both in strong voice as they began to bring the show to a close with the Police standards "Every Little Thing She Does is Magic" and "Roxanne" and other well-chosen cuts. The main set ended on a high note, as the two co-headliners and their superb band powered through the anthem "In Your Eyes." 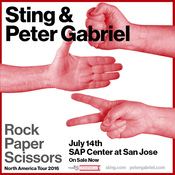