He may have waited until four decades into his reign of pop stardom to come to Aspen, but Sting delivered what the fans came for on Sunday night, closing the 2019 Jazz Aspen Snowmass Labor Day Experience with a hit parade for a lively sold-out audience in Snowmass Town Park.

Opening with “Message in a Bottle,” “If I Ever Lose My Faith in You” and “Englishman in New York,” the performance was tight as a drum, honed in an ongoing world tour showcasing his biggest songs both from The Police and his solo career – the greatest hits he recently re-arranged and re-recorded for the 2019 album “My Songs” (though he did venture to play his 2018 collaboration with Shaggy. Backup singer Gene Noble here stepped in for the reggae rapper).

Early on, Sting admitted with a smirk that he was an “Aspen virgin” and that somehow he’d never played here. This debut came on a three-night, three-show swing through the Mountain West that concludes the North American leg of Sting’s ongoing tour. The Aspen show was preceded by a benefit concert with the Utah Symphony to benefit the Zion Forever Project in Utah.

Sting is a remarkably well-preserved 67 years old and wears it well, proudly sporting a tight black t-shirt with cutoff sleeves that exposed his distractingly defined arm muscles, cut enough to be visible from near the back of the venue.

His voice is still a robust instrument, too. Though he occasionally leaned on his backup singers and talked through some lyrics, he hit the higher notes when he reached for them, including that iconic whine on the first syllable of “Roxanne” in the chorus.

Energetic and engaged, he urged crowd participation throughout with hand claps, and during regular built-in call-and-response passages – even calling for a bit of jazz hands on “Desert Rose.”

He performed with a four-piece band, two singers and a harmonica player, but it was Sting’s show, tirelessly leading the action of center-stage and working his weathered 1957 vintage bass guitar.

The joyous “Every Little Thing She Does is Magic” was a high point for this very sold-out and enthusiastic crowd in Snowmass Town Park, followed soon after by a set-closing run through “Walking on the Moon,” “So Lonely,” “Desert Rose,” “Roxanne” and “Every Breath You Take.”

It may have been a by-the-numbers hit parade, but you don’t go see Sting for new revelations. You go to hear those hits, to belt out “So Lonely” with 10,000 fellow fans, and if – like many Aspen concert-goers you’d never seen him before – to check the experience off of your list of rock legends. And on that front Sting more than delivered, playing fresh and arena-tested interpretations of just about everything you’d hope to hear him play.

Few fans left early from this festival closing, 95-minute performance – a testament to Sting’s enduring allure. His three-song encore began with “King of Pain” and “Next to You.” Then he quieted things down, saying “It’s my custom to leave a place quiet and thoughtful, so that you can go home quiet and thoughtful,” before ending playing “Fragile” to a hushed crowd.

It may have taken him 40 of touring to make it to Aspen, but he left the stage with a promise to return: “We shall see you again!” atravers@aspentimes.com 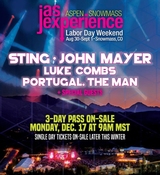