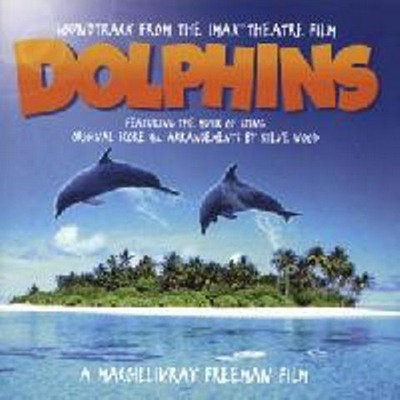 The Dolphins soundtrack, featuring songs and music by Sting was released by Pangaea Records in May, 2000. The Dolphins film score was composed by Steve Wood, who has written fourteen film scores for MacGillivray Freeman Films' giant screen productions. Wood's credits include 'Everest' and 'The Living Sea', a popular soundtrack that also featured the music of multi Grammy® Award-winning musician, singer and songwriter Sting. Wood combined his original compositions with Sting's to create a joyful-sounding film score that features the music and musicians of the film's two principal locations. The smooth, friendly-sounding percussion of the Caribbean Islands blend well with the passionate, lively tones of Argentina. Wood and partner Daniel May even transform 'Every Breath You Take' into a dusky dolphin tango during one of the film's more amorous scenes. 'Dolphins' contains one song written for the film by Sting, called 'I Need You Like This Hole in My Head', as well as 'Fill Her Up' and 'Ghost Story' from Sting's Grammy-winning 'Brand New Day'. You'll also recognize the cuts 'Englishman in New York', 'Straight to My Heart', 'Be Still My Beating Heart', and 'When We Dance'. Country star John Berry lends his talents on the lively 'Every Breath You Take'.


The Dolphins soundtrack, featuring songs and music by Sting was released by Pangaea Records in May, 2000.